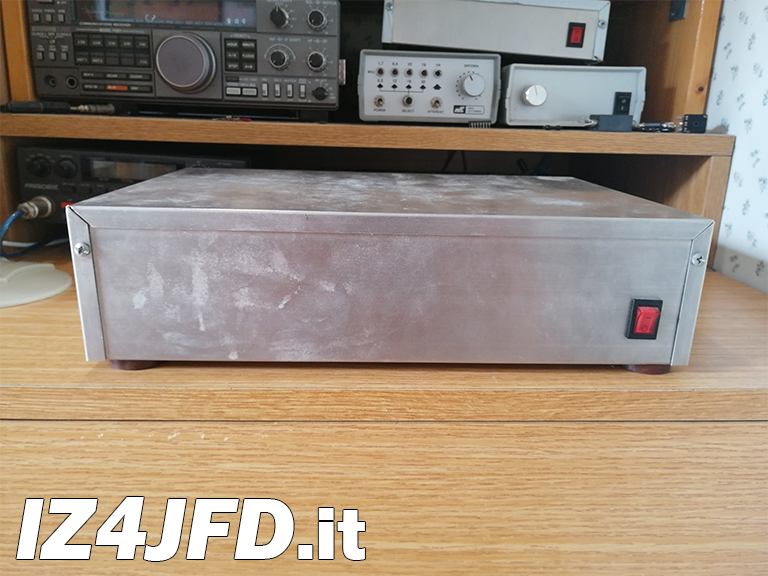 After the positive results obtained with Peppe, my curiosity to experiment with tubes was satisfied by making Massimiliano's VT version, which is based on the same theoretical assumptions (therefore, on the same project) and has the same purposes as the solid state version of this AF "balun". Obviously, the main difference consists in the use of two vacuum tubes instead of three field effect transistors, and in the consequent design and circuit "complexity" deriving from this.

The differential amplifier, which is also the input stage of the entire converter circuit, was made using an ECC82 valve, whose two triodes amplify the half-waves of the AF signal coming from the microphone. The beginning of the "Converter stage" paragraph for the solid state version of Massimiliano applies here, to describe the characteristics of balanced and unbalanced AF signal sources, as well as the operation of a differential amplifier.

In this version, the differential amplifier is supplied at 200 + 200 Vdc, each triode of the ECC82 has a -2 Vdc grid bias and hosts a 0.65 mAdc current, approximately. As in the solid state version, in Massimiliano's tube edition there is a "long tail" resistor too, the cathode resistance necessary to correctly bias the differential amplifier (as well as to eliminate common mode noises before they reach both triodes), whose value is considerably higher than what the same resistor would have if the ECC82 was powered with single DC supply.

From the anode of the first triode, the AF signal (now, unbalanced and amplified) is applied to the grid of the second tube, a 12J5 triode used as an output buffer and supplied with all the positive voltage available at the output of the power supply stage (+200 Vdc), with -10 Vdc grid bias and a 1 mAdc plate current, approximately. The 12J5 works in "cathode follower" configuration: the AF signal exits from the cathode, which gives Massimiliano a very low impedance output and makes the choice of the output cable absolutely not critical.

Since the filament of the 12J5 does not have a "center tap", if there is a strong hum in the output signal (due to a possible loss of current between cathode and filament), it is sufficient to use two 220 Ω/¼ W resistors in series with each other, and connect this series in parallel to the filament of the 12J5. The midpoint between these resistors must be connected to the ground of the ECC82 DC supply and acts as an artificial center tap, discharging the current loss onto DC ground and preventing it from generating hum.

As in the corresponding solid-state version, the power supply stage of Massimiliano's VT version provides for a dual supply (+200 and -200 Vdc). The 150 + 150 Vac available at the HT secondary of the mains transformer are rectified by the W10M bridge and leveled/filtered by the two electrolytic capacitors marked C1 and C2.

Downstream of the rectifier bridge there are 200 + 200 Vdc, approx.: before reaching the output of this stage, each voltage (and its current) must pass through a 10H inductor (L1 and L2, Hammond 157H type each), after which there is another electrolytic capacitor (C3 and C4). The L1/C3 and L2/C4 pairs carry out a further filtering/leveling operation to reduce the 100Hz ripple and prevent it from reaching the output of the power supply stage.

The other secondary of the mains transformer supplies 10Vac, also rectified by a W10M diode bridge and leveled/filtered by a 4700uF/25V electrolytic capacitor. The 12.6Vdc thus obtained are applied to the heaters of the tubes (pins 4 and 5 of the ECC83, pins 3 and 7 of the 12J5).