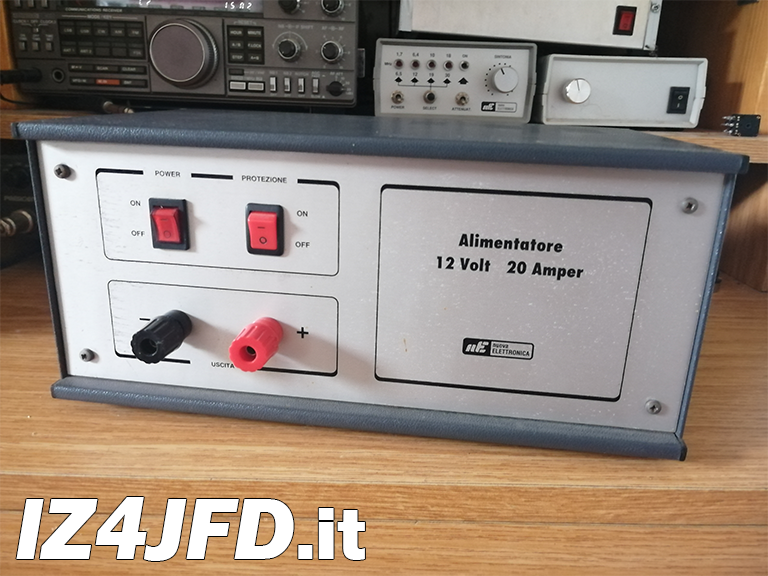 When it joined my station, Maciste was a DIY kit (ref. LX.1147) published on the Italian electronics magazine Nuova Elettronica: a regulated power supply with adjustable output voltage, between 10 and 14 Vdc, and capable of delivering a 20A max. continuous current. The Nuova Elettronica original project used a differential amplifier (made with two BC547 transistors and a LM339 precision zener diode) to regulate the DC output voltage, and two GT20D201 type IGBT transistors to supply the current typically requested by a 100W RTX. However, this project did not provide any protection neither for the power supply, nor for the load connected to it, beyond the fuse in series with the primary winding of the mains transformer, and a 1N4001 diode to be used only with 10A max. loads. During a QSO with ham friends from Sicily, talking about the LX.1147, Pinuccio IT9CMV told me: "Valerio, just mind the RTX. You only have one, it's not worth it", meaning the risk of using my Kenwood TS-140S with a “harmful” power supply. After that, other projects came before I found a solution to the LX.1147. But I did never forget Pinuccio's words, and the result is described below.

To avoid any possible consequence of situations such as overvoltage, overload or short circuit, I designed a voltage regulator and protection stage to replace the differential regulator provided by Nuova Elettronica and introduce the circuit arrangements to contain any malfunctions of the power supply. Since I had two UA723C integrated circuits, I decided to use one of them. The wiring diagram of the "new" regulation/protection stage is derived from one of the applications in the UA723C datasheet (from Fairchild): application n. 5, "Positive Voltage Regulator (with external PNP pass transistor)".

In order to obtain 15Vdc ± 10% with the "Positive Voltage Regulator (with external PNP pass transistor)" application, it is necessary to modify it as follows:

The integrated circuit and all the components present in my schematic have been moved to a new PCB, in addition to the other two already present in the LX.1147, which was fixed inside the metal box of the power supply. For obvious reasons of convenience, I kept the PCB on which the IGBTs and all the components of the previous voltage regulation stage were located, but I removed the components not included in the new schematic diagram, as well as those that have been moved to the third, new PCB.

Furthermore, adapting my schematic for the use of two IGBT transistors, instead of two or more bipolar transistors external to the UA723C, was very simple and straightforward. In the same diagram, the resistance marked Rsc generates a voltage drop equal to 0.65Vdc. This occurs in the event of a short circuit between the output terminals of the power supply, or when the output current reaches its peak. In both cases, since this resistor is connected to the base and the emitter of a transistor internal to the UA723C, this voltage drop brings it into conduction and triggers the protection mode provided by the IC. With Maciste, the maximum output current (corresponding to the short-circuit current) is 25A: to obtain the 0.65Vdc voltage drop across Rsc, this resistor must have a value of 0.026Ω. I used 10 resistors (0.27Ω/5W each), in parallel with one another, to obtain an overall value equal to 0.027Ω, which drops the peak current to just under 25A. For me, it is acceptable. In any case, the 100Ω potentiometer placed in parallel with the 10 resistors allows a fine adjustment of their overall value (as well as a compensation for their tolerances).

If there is an overload or a short circuit at Maciste’s output, the prevention measures described here should be sufficient to prevent any consequences. But if one of the IGBTs is short-circuited between the emitter and collector, (that is,), the DC voltage at the rectifier bridge (and the filtering/leveling electrolytic capacitors) would be present at the output of the power supply. The value of this voltage (24Vdc, approx.) would cause damage to a load designed to be fed with 13.8Vdc (including my Kenwood TS-140S). I thought that the maximum DC voltage at the output of Maciste should not exceed 15Vdc, a value that I consider an adequate safety limit for the load. I used an SCR (a BTW67-1000 from ST) connected between the positive and negative output plugs of the power supply.

By means of R13 and R14 resistors, if the DC voltage at Maciste’s output reaches or exceeds 15Vdc, the SCR has been set to trigger. That is, to short-circuit the output terminals of the power supply. This situation would lead to the destruction of the fuse placed in series with the primary winding of the mains transformer, but it represents an effective protection for anything intolerant to DC supply voltages higher than 15Vdc, which Maciste must not exceed. Furthermore, to let Maciste provide a DC voltage as much as possible free from disturbances from the 230Vac/50Hz network, I used a mains filter (230Vac/50Hz input voltage, and 10A max. pass-through current) connected to the mains transformer. It goes without saying that the performance of this filter depends on the presence of an efficient earthing system, which complies with the electrical and safety standards in force.

Before "lighting up" the power supply, it is necessary to turn the wipers of the R12 and R13 potentiometers, respectively, to the terminal connected to the RF choke L1 and to the terminal connected to the anode of the SCR. After "launching" Maciste and ascertaining the presence of the 13.8Vdc required on its output terminals (if necessary, this voltage can be set acting on the R9 potentiometer), the Rsc and SCR calibrations must be performed. The first operation sets the value of the short-circuit resistance of the UA723C, so that – when Maciste supplies 25A – Rsc produces a voltage drop equal to 0.65Vdc, bringing the IC in protection mode. As a suitable load, I used 3 PCBs on each of which there are 20 resistors, 5W each. These resistors have been organized into 10 pairs, all in parallel with one another: within each pair, the resistors are in series between them, obviously.
For 2 of these circuits, the resistors within each pair are equal to 12Ω and 1.8Ω, with a resulting overall value of 13.8Ω. The parallel of the 10 pairs equals to 1.38Ω: applying 13.8Vdc to one of these circuits, its absorption will be equal to 10A, approximately.
In the third circuit, each pair consists of 22Ω and 5.6Ω resistors. The total resistance will be 2.76Ω and its absorption amounts to 5A. By connecting the three circuits to the Maciste output, the current delivered will be 25A.
Now, the first thing to do is to turn off the power supply. Connect the load to the Maciste output terminals. Now, you can turn it on. At full absorption (again, 25A, the R12 wiper must be turned to the terminal connected to the IC and the collectors of the two IGBTs), slowly and with the utmost attention. As soon as the IC enters protection mode, Maciste must be turned off and the load disconnected from its output plugs. Rsc has reached the value necessary to safeguard the power supply and the load should an overload/short circuit produce a current equal to or greater than 25A. To calibrate the SCR, again, you start by switching off Maciste. At this point, observe the R9 potentiometer and memorize the position of its wiper, which - later - must be set halfway. After turning on the power supply, check that it produces 15Vdc (if not, it is possible to act on R9 to reach this value). Now, the R13 wiper must be turned towards the terminal connected to R14, calmly and without being distracted: when the SCR triggers, turn off Maciste and turn back the R9 wiper to the 13.8Vdc position. The Maciste shutdown must be done as quickly as possible: the SCR has short-circuited the output terminals of the power supply, and - despite the presence of the UA723C and the short-circuit resistor - the mains fuse could blow. However, once the SCR has been adjusted, it is possible to use Maciste safely.