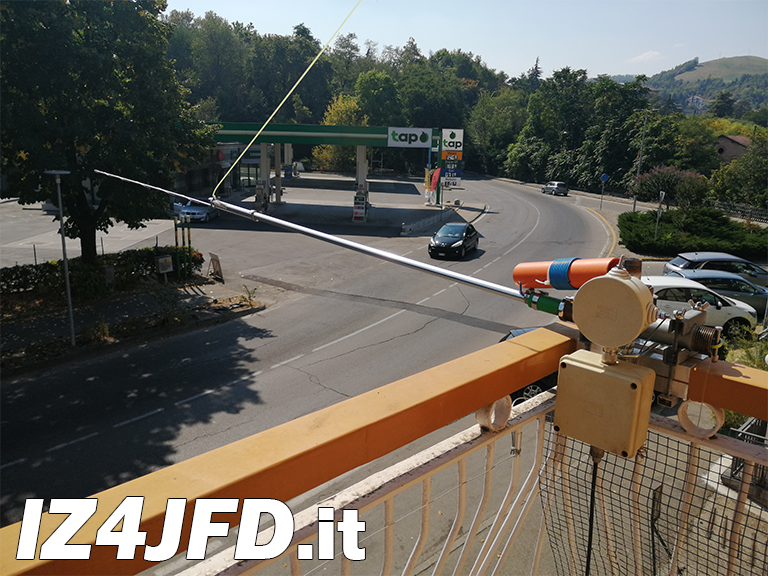 If you are a ham radio operator, the best place to install an antenna is outdoors. If you live in your own home, you can install it wherever you want: on the roof, in the garden, anywhere. If you live in an apartment building, to install it outside, you can go up to the roof and do it there, make it outside one of your windows, or take advantage of a balcony (if you have one). I chose this last way to install Carmela: I anchored it to the handrail, secured it to the balcony with a nylon tie, and connected it to my radios with an RG58 coaxial line. While waiting to have my antennas on the roof of the building I live in, my antennas are hosted on my balconies. Like all antennas installed (successfully) where they should not be, Carmela is a successful experiment: minimal impact on the aesthetics of the building, small dimensions, instrumental SWR (less than 1.1: 1 at 14.2 MHz). The disadvantages are a little more than the advantages, but they are significant: first of all, the fact that the antenna is located near structures that alter the radiation pattern and reduce the amount of RF effectively radiated. A little favorable propagation is enough to go beyond all this, and allow Carmela to achieve results that would be considered impossible for an antenna like this.

Carmela is a “sniper antenna”: horizontal (parallel to the ground) radiating stylus, coaxial (or parallel, with respect to the stylus) loading coil, fixing bolts and feedpoint placed at one of its ends. Looking at her from the side, Carmela looks like a sniper's weapon.

Its radiating element is made by:

Pipe and rod are fixed to each other at one end, by two stainless steel clamps: by varying their common surface (that is, by lengthening or shortening the antenna) it is possible to vary its resonance frequency.

If my apartment were on the top floor of the building (if there was nothing above my balconies), Carmela would have been installed vertically on the handrail. Since I live on the first floor, and there are two rows of balconies above mine (two apartments above me), the only possible installation was the horizontal one, to minimize the influence of the building structure, and the above balconies, on the operation of the antenna. Though this, it was impossible to avoid the effect of a ground that is closer than necessary (4 meters, approximately, instead of the expected 10 meters).

Carmela is a short vertical, an antenna whose physical length is less than 1/4λ at its working frequency. The impedance of an antenna like this consists of two parameters:

To match a short vertical to a coaxial cable, type RG58 or RG8, it is necessary:

My solution consists of a 12 turns loading coil (close) wound on a piece of PVC pipe for hydraulic use (4 cm in diameter), which is positioned between the radiant stylus and the antenna feedpoint.

As a counterpoise (ground conductor), I used a fence, made up of galvanized iron mesh panels electrically connected to each other with a stainless steel wire, which I applied to the metal railing of the balcony on which I installed Carmela. On the other balcony, I made another identical fence: the last, obvious step was to let the two balconies become a single, 15 meters long (ground) conductor with a stainless steel braid placed between them.

Beyond instrumental parameters, the acceptable performance of this antenna is also proven by its use. Carmela was installed in Summer 2021. In the following days, first DXes on 20m began, mainly at night (between midnight and 2 AM, Italian daylight saving time), with a power between 100W (the output of my Kenwood TS-140S) and 300W (the output of my RM Italy BLA350). The stations I contacted are from North to South America. Mainly, the Atlantic coast of North America, from which I received RST reports ranging between 55- and 57-.
This confirms what I already said: Carmela is an antenna with a few more disadvantages than its advantages, but it is also an antenna that is doing anything that's technically possible when installed this way.