Lato (short for Consolato, a very common name in the Province of Reggio Calabria: Consolato › Lato) is the second unun I built, it has a transformation ratio of 2.25: 1 and is suitable for coupling an unbalanced transmission line (Zl = 50 Ω) to a 22 Ω unbalanced load. After the failure I had with Gregorio in trying to make my "short" sloper resonate on 80 meters, I thought that the antenna impedance was less than 50 Ω and more than 12.5 Ω. I assumed the Ohms were 22, and I was wrong.

Like Gregorio, Lato is a transmission line transformer made with the same components used to build Gregorio (this time, instead of the AWG14 Thermaleze copper wire, I used a 2 square millimeters "normal" enamel copper wire). Like the latter, Lato is based on the three-wire transmission line transformer scheme developed and published by C. J. Ruthroff. In this case, switching between the first two windings in the original scheme has the third winding to be in the middle of them and to carry the most of RF current. This results in a tight coupling between winding 3 and windings 1 and 2, which causes a decrease in the characteristic impedance of the three-wire transmission line, resulting in a better efficiency of the transformer in carrying an RF signal from 50 Ω unbalanced to 22 Ω unbalanced.

Lato's homebrewing takes place in the same way already described for Gregory. Obviously, it is necessary to respect the wiring diagram of this 2.25:1 unun rather than the 4:1 unun.

To test the Lato’s correct functioning, I used 4 resistors (22 Ω/2 W each), connected in series-parallel to each other, and I connected them to Lato's output. As a result, the tests carried out produced a SWR of less than 1.1: 1 on the entire HF range, confirming Lato's extraordinary stability, the validity of its schematic diagram (even if there was no need to try it) and the goodness of my homemaking. 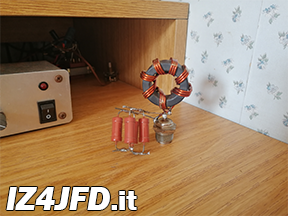