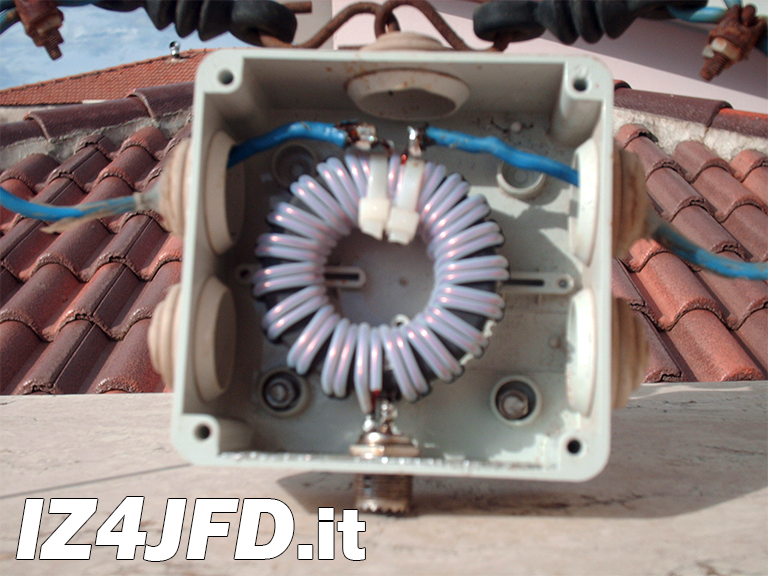 Enzo is a 4:1 balun built to feed Agata, the Windom that I used to transmit on 40, 20 and 10 meters, and to couple the antenna to the coaxial cable transmission line (RG213) that connects it to the rest of the station. It is an excellent ferrite balun made for HF frequencies and for the very first VHF ones, since its frequency response is almost flat up to about 50 MHz. It is a home-made device based on the 4:1 balun prototype realized by Jerry Sevick W2FMI (SK) and described in his book "Transmission Line Transformers", 4th edition. For his studies and experiments, Sevick referred himself to the "current" balun schematic, described and published by G. Guanella in 1944.

Enzo is a transmission line transformer realized with two bifilar windings (the transmission lines) wound on a FT240-61 ferrite toroidal core. Each line is made with two AWG16 enameled copper conductors, each of which is inserted inside an AWG14 Teflon tube. The two copper wires, thus insulated, are parallel and in constant physical contact to each other: the Teflon tubes increase the electrical insulation inside the line and the distance between the two conductors, which results in a 100 Ω typical impedance for each transmission line. One line is wound on one half of the toroidal core, while the second line is wound on the remaining half. Each winding consists of 10 turns. The two windings are connected together so that the transmission lines are parallel to each other at the input of the balun (50 Ω side) and in series other at its output (200 Ω side). 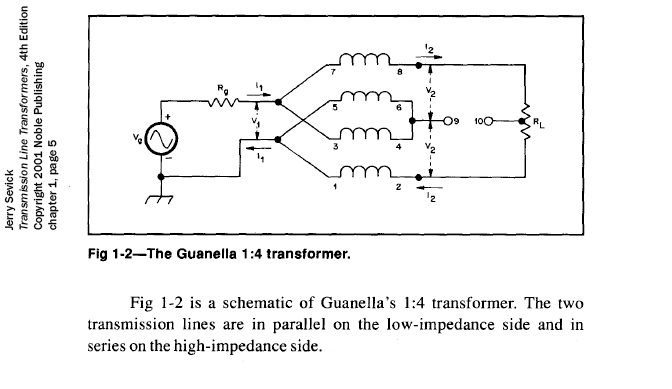 The size of the toroidal core used and the permeability of the 61 ferrite mix (equal to 125 and constant on the HF range) allow Enzo:

The last, third characteristic was confirmed with a test performed by connecting Enzo to a 200 Ω resistive dummy load (two resistors, 100 Ω / 5 W each, in series with each other): SWR stable and close to 1: 1.1 from 1 to 30 MHz.

The first step during Enzo's construction was the preparation of the two bilfilar transmission lines. The recommended method is to measure the length of each line, on one half of the toroid. As a precaution, this length can be increased by a few centimeters. After that, it's time to cut four segments of enameled copper wire and Teflon pipe by that length, and to insert each of the 4 copper segments inside one of the 4 pipes. For each pair, the pipes (therefore, the conductors) are arranged parallel and adherent to each other, maintaining their mutual arrangement with a few turns of insulating tape to be repeated at regular intervals all over the entire length of the transmission line.

Now, each line must be wound on one of the two halves of the toroid (for example, the first line on the left half of the core, the second line on the right half), taking care to maintain the adherence between the tubes of each pair and to cover an exact half of the toroid with 10 turns. When the windings are completed, it is possible to weld the conductors of the two bifilar lines together, creating the input and output terminals of the balun, as required by its wiring diagram.

As it is intended to be used outdoors, the balun requires a watertight container: Enzo has been inserted inside a waterproof, plastic box that I placed on the top of the Agata support pole, by means of a clamp obtained from an old TV antenna. The input terminals of the balun are welded to a SO239 connector, which has been applied to an aluminum rectangle I glued inside the box, with the connector protruding outside through a pre-existing hole. Inside the box, the ends of Agata’s wires are welded to Enzo’s output terminals. This way, the only electromechanical connection for Enzo is the SO239 connector present at the input of the balun.

Enzo is a balun necessary to couple a coaxial (that is, unbalanced) cable transmission line (50 Ω) to a balanced load (in my case, it is Agata, an OCF dipole) having a 200 Ω impedance.
Inside my lab, Enzo was connected to the a 200 Ω/5 W resistive dummy load and was fed with the same coaxial line (including all RF chokes I need to prevent any RF feedback) used to transmit with Agata: the tests on the dummy load confirmed Enzo’s efficiency on all HF ham bands.
When outdoors, Enzo's efficiency is also a function of what is close enough to the antenna to influence its behavior. My experience with Agata made me learn that, when using an OCF dipole, the best thing is to have an efficient balun AND a good supply of RF chokes, since – with Windom antennas - RF feedback is much more a concern than it is with other antenna types. Anyway, once I had no RF back to my shack, Enzo proved to be one of the best resources I have available to my ham radio station.